Sports Media Watch released the final TV ratings for college football. Click here to read their more complete breakdown. But here is a snapshot of the games and how many watched.

Food stamp usage is on the rise again in America. Rough estimate of what the federal government spends is around $77 Billion a year. What makes this news worthy is it conflicts with the notion that the economy is in great shape. Another problem is the program is very lax on rules and has become a new “social justice” program.

Here is more from CNSNews.com

The number of beneficiaries on the Supplemental Nutrition Assistance Program (SNAP)—AKA food stamps–has topped 46,000,000 for 38th straight months, according to data released by the Department of Agriculture (USDA).

In October 2014, the latest month reported, there were 46,674,364 Americans on food stamps. Food stamp recipients have exceeded 46 million since September 2011. 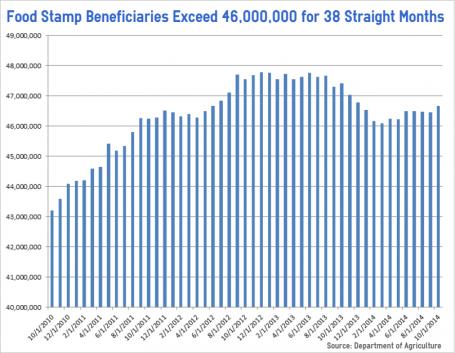 If you don’t believe this program isn’t somewhat over used, let this stat sink in: