In the mail I recently got an advertisement pack that contained various business coupons. Huntington Bank had this offer if you opened a checking account: 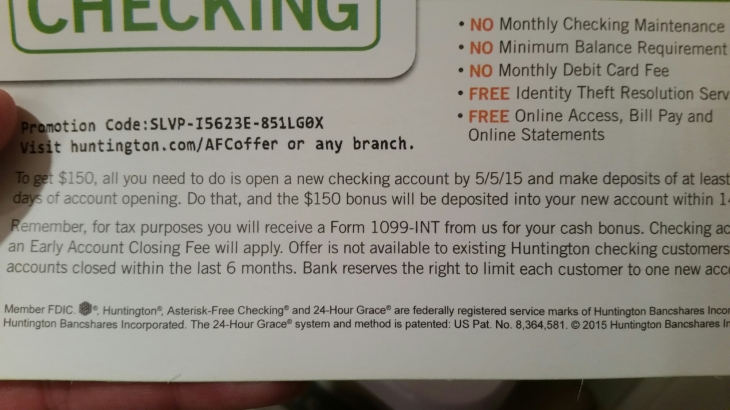 Dr. Ed Yardeni has put together a post showing the consumer has saved dollars YTD on gasoline prices, the savings is being eaten up by higher medical expenses.

Last week, I observed that while consumers are spending less of their budgets on gasoline, they are spending more on health care. The latest data through January show that the percentage of current-dollar consumption for gasoline plunged from last year’s high of 3.2% to 2.1% in January. Consumers saved $133 billion (saar) on gasoline over this period.

On the other hand, the percentage of their outlays for health care goods and services rose from last year’s low of 20.0% during March to 20.6% during January. I received lots of inquiries about this topic. Most readers want to know if this is attributable to Obamacare, which seems to have raised health insurance premiums, deductibles, and copays. I think so, but I don’t have the data to corroborate this conjecture.

Health care consumption includes spending paid for by both insurance and government programs, as well as out-of-pocket costs. Presumably and anecdotally, the latter have risen sharply. However, that wouldn’t necessarily bloat overall spending, though more out-of-pocket outlays would depress spending on other goods and services.