This blogging site is not a fan of the Federal Reserve. The money printing that has gone on f

END_OF_DOCUMENT_TOKEN_TO_BE_REPLACED 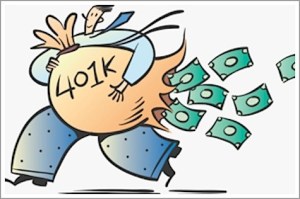 END_OF_DOCUMENT_TOKEN_TO_BE_REPLACED

Business Insider had this post about Americans saving money at the gas pump. You can read the whole post here.
END_OF_DOCUMENT_TOKEN_TO_BE_REPLACED

More investors are taking out loans against their 401(k)s, and that could hurt their retirement income by hundreds of dollars a month, according to an analysis by Fidelity Investments released Wednesday.

The number of investors borrowing from their 401(k)s has been steadily increasing for more than a decade. Today, more than one in five people, or 22.5% of Fidelity’s 401(k) investors, borrow against their retirement savings, up from 18.7% in 2000, according to Fidelity’s analysis of 13 million investors.

More than 2 million investors have outstanding loans, and nearly 1 million took out loans in the past year.