NFL’s 2020 financial hit from COVID and fans not dialing in over the political direction of the league is now surfacing.

END_OF_DOCUMENT_TOKEN_TO_BE_REPLACED

Nike has spent some serious cash on endorsements  END_OF_DOCUMENT_TOKEN_TO_BE_REPLACED

On April 28, 2016, the NFL will hold its annual draft. NFL teams spend millions of dollars on scouting departments
END_OF_DOCUMENT_TOKEN_TO_BE_REPLACED

The NFL playoffs begin this weekend. Players contracts are
END_OF_DOCUMENT_TOKEN_TO_BE_REPLACED

NFL free agency kicked off on Tuesday March 10th. Numerous players either stayed or left their teams in pursuit of greener pastures. How much in contracts were signed this past week? Sportrac.com has a system set up tracking these numbers and here is the breakdown from studying the signings.

– Average length of contracts is 3 years

– Total amount of all contracts signed (disclosed/undisclosed) tops over $1.5 Billion

– Total amount of guaranteed money NFL teams must pay is $634 Million. The top five contracts account for $170.9 Million of that.

NFL contracts almost never get fully paid out. Each year these contracts are reworked, players cut, retirement or clauses are invoked terminating the amounts paid. Guaranteed money is paid out in full barring any contract clauses not met. 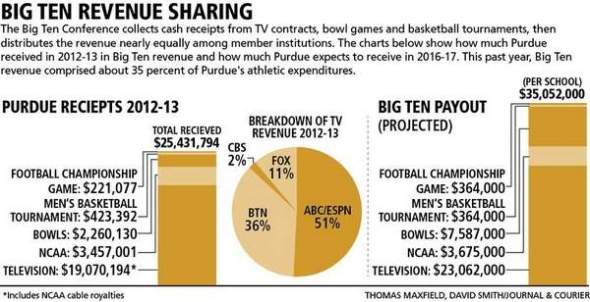 Want to know how much money Big Ten schools rank from football alone? A lot and they are about to become very much wealthier. Before one bashes this money, just remember the next time you see a “softball complex” or an obscure sports facility being built on a Big Ten campus, that funding probably came from Big Ten football itself.

As a football enthusiast I remember very distinctly when the Big Ten Network kicked off in September 2007. The idea to air “Big Ten” only sporting events was laughed at by people not grasping the desire to see football games of all kinds. Six years later it is seen in almost 100 million homes in the U.S. and Canada. Financially it has paid its obligations and turned a profit just last year. Here is something else to ponder that Mike Carmin covered:

One year before BTN launched, the Big Ten Conference distributed about $14 million to each of its 11 schools.That was 2006-07. Six years later, that figure has jumped to more than $25 million.

According to documents obtained by the Journal & Courier from Purdue, the Big Ten is expected to distribute about $26.4 million per school after 2013-14 — and more than $35 million at the end of the 2016-17 academic year.

Budgets vary greatly in the Big Ten when it comes to athletics. Ohio State currently operates a budget of $132 Million compared to Purdue who runs a budget of $70 Million. Here is the breakdown of revenue payments received:

Schools in the Big Ten share equally in the revenue generated by television contracts, NCAA distributions, bowl games — including Bowl Championship Series and the future College Football Playoff format — along with the gate receipts from the league’s men’s basketball tournament and football championship game.

The Big Ten is about to get a lot wealthier.  Many of their TV contracts are due to be re-negotiated in 2016-2017(Minus BTN which is a 25 year contract).

In 2006, the Big Ten signed a 10-year, $1 billion deal with CBS and ABC/ESPN for first-tier rights and a separate 25-year agreement with BTN. The Big Ten’s deal with Fox to broadcast the football championship game started in 2011 and ends in 2015.

Projections are just that, but the aforementioned $35 million per-school figure may pale in comparison to what each school will receive once the league’s next television contract is finalized.

“The ’16-’17 year is an important mark because that coincides with the end of our current television agreement with CBS, Fox and ESPN,” Traviolia said.

Look for many Big Ten schools to enjoy continued financial success well into the mid 2020’s and beyond. The next bigger task will be to break up the NCAA and let the conferences soak in their revenue they stockpile. 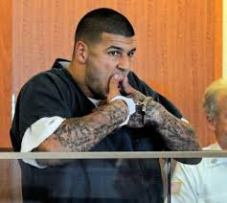 Recently, a database was produced by U~T San Diego that chronicled arrests of NFL football players dating all the way back to the year 2000. Total number of arrests are 665 over the span of 14 years. This number accounts for one arrest so far in the month of July of this year and ends there. It is a nice comprehensive listing that NFL fans should check out.

Below I am going to list a breakdown of the arrests into some categories with numbers and did this purely for stat purposes. Anymore sports are broken down with stats, so I figured why not just add more to pass time before training camp started. This work was done solely by me and I do not know if other work is out there which is similar. So no offense to any stat guy that may find this the same as their work.

I went through the entire database and counted the number of arrests each year and how many happened in what month.  I then took all arrests for one month and added them together over that fourteen year period. So for example, the month of May, I went through each year and counted up the arrests and added them all together for the span of 14 years and found a total of 76 arrests happened over that time period. That equated to an average of 5.42 NFL football players arrested during the month of May over that fourteen year period. Now, if you were to ask if the 5.42 average was constant, I would say “Maybe”. I looked at the months of May where 4-6 players were arrested during those fourteen years and it hit six times. In there was some arrests that totaled 1, 3, 7 or 10. As you can see, that 5.42 average can wildly fluctuate.

Without further boredom, here are some key stats that I found so I hope you enjoy.

Very reluctant to post this next item, but looking at the averages of months from previous years, 2013 is on track for 57-60 arrests. Like I said, doing averages can vary greatly with this sort of database.