Numerous people are nuanced when talking about education for the youth in America. There is nothing wrong with wanting the best for children getting a good education. Reality of economics is often ignored when debating education by those either in the profession or sitting in local/state/federal government. Multiple school districts across America are facing horrendous financial situations due to terrible contract negogiations with teacher unions, unreasonable spending habits and mismanaged overall budget assumptions by local governments.

IllinoisPolicy.com shows how one of the biggest school districts just learned the harsh reality in its attempts to fund the schools. I suggest reading the link as it has another chart in how much CPS debt has grown. Below are a few snippets:

Chicago Public Schools, or CPS, needs to issue $875 million in long-term bonds to help the district avoid bankruptcy – but on Jan. 27, the school district backed out of the planned sale. The district announced that it has postponed the bond sale and will assess the situation on a day-to-day basis.

The failure to issue the bonds means the district has to postpone the refinancing of several debts.According to CPS, $340 million of the total borrowings will be dedicated to refinancing old debt, and nearly $90 million will go toward paying off other short-term loans. The district plans to use nearly $400 million to pay for capital projects. 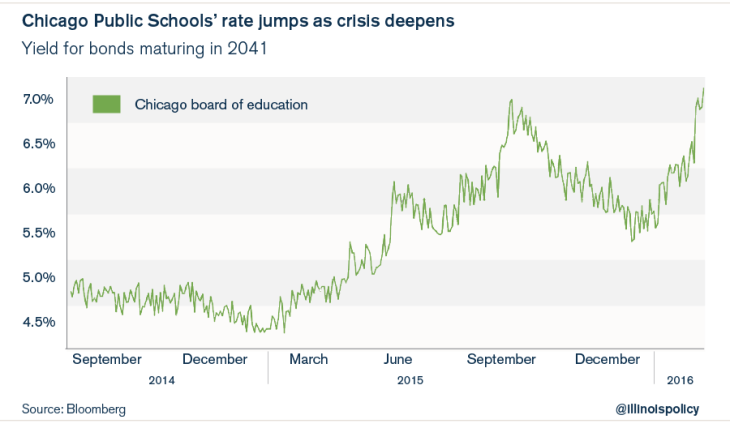