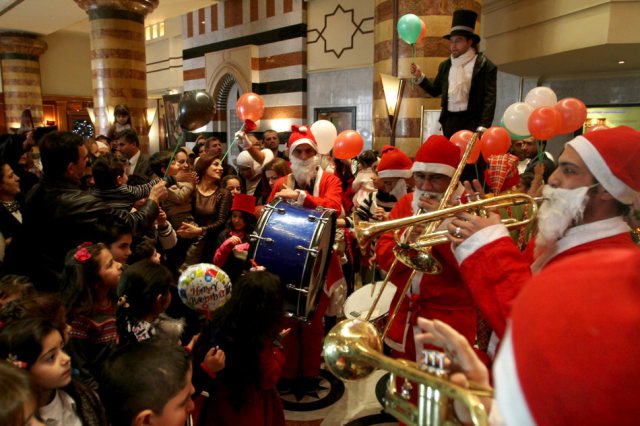 A beautiful moment has unfolded in Syria that won’t get much media play here in America but should be celebrated by Americans and Christians.Zero Hedge ran a piece showing photos of Syrians celebrating Christmas just one year after their main city of Aleppo being liberated from ISIS and the Muslim Brotherhood.

It’s been just over one year since the liberation of Aleppo from radical Islamist insurgent groups which were backed by the West as well as Gulf states like Saudi Arabia and Qatar. And this Christmas has witnessed huge public celebrations, tree lightings, concerts, and dances in a city which only a short while ago was associated with death, mortars, airstrikes, assassinations, and suicide bombings.

Though occasional mortar fire and explosions still enter the city environs, Christmas 2017 has been marked by carefree exuberance and a sense of relief as the city rebuilds, and as some 600,000 displaced residents return to reclaim properties and possessions, ready to resume their normal lives again.

Coverage of the Syrian war will be remembered as one of the most shameful episodes in the history of the American press… For three years, violent militants have run Aleppo. Their rule began with a wave of repression. They posted notices warning residents: “Don’t send your children to school. If you do, we will get the backpack and you will get the coffin.” Then they destroyed factories, hoping that unemployed workers would have no recourse other than to become fighters. They trucked looted machinery to Turkey and sold it…

The United States has the power to decree the death of nations. It can do so with popular support because many Americans — and many journalists — are content with the official story.

Now, during the first full Christmas season of relative peace and calm, Aleppo residents are showing the world that they’ve rejected a future of Saudi-style Wahhabi Islamist rebel rule imposed from outside, instead proudly displaying their pluralistic culture and toleration through mass public Christmas displays in the heart of the Middle East.

Syrian President Bashar Assad faces a different type of threat then what any U.S. government official running their town, state or even federal government can grasp. He has to run a secular democracy where Christians attend church while surrounded by a hornets nest of radical Islamic jihadists. His tactics against jihadists like the Muslim Brotherhood and ISIS are crude and violent, but he also saving the lives of millions of Christians. His father had to quell a Muslim Brotherhood and other Sunni Muslim groups uprising in 1982 known as the Hama Massacre. These groups, in order to take over the city, went into homes killing men, women and children.

American Christians (even non) should be delighted that the celebration of a Christian holiday is back in a city where just a year ago the inbred mentally deranged were once in control.

The Syrian Christians and citizens have faced the most violent atrocities imaginable, over came evil and now celebrate the birth of Christ.