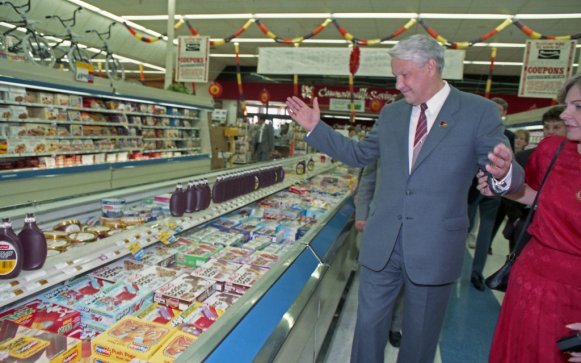 Americans who have not studied communism take capitalism for granted.
Case in point is when former Soviet leader Boris Yeltsin visited America. What made his visit relevant was not any new diplomatic strategy. It was when he made an unscheduled visit to a Texas grocery store.

09/16/1989 – Boris Yeltsin and a handful of Soviet companions made an unscheduled 20-minute visit to a Randall’s Supermarket after touring the Johnson Space Center.

Russian president Boris Yeltsin’s wide-eyed trip to a Clear Lake grocery store. It was September 16, 1989 and Yeltsin, then newly elected to the new Soviet parliament and the Supreme Soviet, had just visited Johnson Space Center.

Yeltsin, then 58, “roamed the aisles of Randall’s nodding his head in amazement,” wrote Asin. He told his fellow Russians in his entourage that if their people, who often must wait in line for most goods, saw the conditions of U.S. supermarkets, “there would be a revolution.”

Shoppers and employees stopped him to shake his hand and say hello. In 1989, not everyone was carrying a phone and camera in their pocket so Yeltsin “selfies” weren’t a thing yet.

Yeltsin asked customers about what they were buying and how much it cost, later asking the store manager if one needed a special education to manage a store. In the Chronicle photos, you can see him marveling at the produce section, the fresh fish market, and the checkout counter. He looked especially excited about frozen pudding pops.

“Even the Politburo doesn’t have this choice. Not even Mr. Gorbachev,” he said.

About a year after the Russian leader left office, a Yeltsin biographer later wrote that on the plane ride to Yeltsin’s next destination, Miami, he was despondent. He couldn’t stop thinking about the plentiful food at the grocery store and what his countrymen had to subsist on in Russia.

In Yeltsin’s own autobiography, he wrote about the experience at Randall’s, which shattered his view of communism, according to pundits. Two years later, he left the Communist Party and began making reforms to turn the economic tide in Russia.

“When I saw those shelves crammed with hundreds, thousands of cans, cartons and goods of every possible sort, for the first time I felt quite frankly sick with despair for the Soviet people,” Yeltsin wrote. “That such a potentially super-rich country as ours has been brought to a state of such poverty! It is terrible to think of it.”