Back in 2011 I decided to spend some money and had a big book shelf system put in. I love collecting books that I can pass down to my daughter. I wondered then how hard it would be to get certain authors in print once the whole “E-Read” took off. Well, my fears have subsided with this recent data. More from QZ.com and whole article can be accessed here:

For the last half decade, ever since digital books and e-readers first came on the scene, news headlines have been at war. “The physical book is dead,” some reports declared, while others vehemently argued for the eternality of the printed word.

Data, actually, supports the latter sentiment. At least in the US, sales of physical books have experienced a renewed surge of interest, according to Nielsen BookScan, a data provider that collects data on roughly 85% of the print market.

As of early December 2015, Nielsen says, around 571 million paper books have been sold in the country—a modest but noticeable increase over the 559 million sold in 2014. 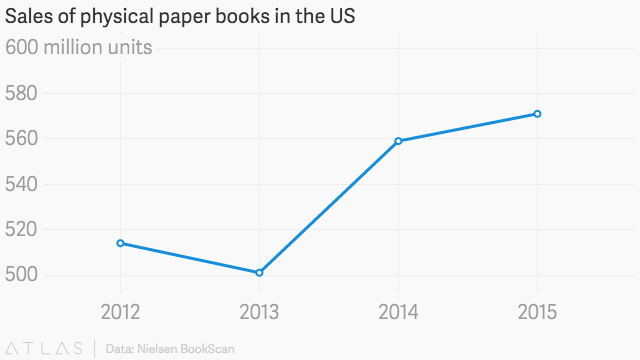