The numbers are staggering in how fast medicaid is growing and spending. This isn’t a sexy topic to talk about but that is the psychosis of America’s political landscape today. Here is some recent news pertaining to this federal government social program.

Medicaid enrollment has surged 19% nationally since ObamaCare’s expansion—50% in New Mexico, 65% in Oregon, 81% in Kentucky. The Congressional Budget Office reports that Medicaid spending rose 21% in the first five months of fiscal year 2015, “largely because of” ObamaCare.

Another source, The Heritage Foundation added more data to the topic of medicaid growth –

This jump does not even include the Obamacare insurance exchange subsidies that are now in place—a $7 billion increase so far this year. Medicaid and the Obamacare subsidies account for $28 billion of the $88 billion in mandatory spending increases this year. The extent to which growth of Obamacare and other entitlements is responsible for this increase is even more pronounced than at first glance. Leaving GSEs out of the equation, increases in Medicaid and Obamacare subsidies accounted for half of the mandatory spending increase so far this year. Meanwhile, defense spending is down nearly 5 percent.

One more item from Heritage is the overall growth of entitlement spending.

Chart 12 shows the growth of more than 80 welfare programs since 2007—including food stamps, unemployment insurance, housing aid, Medicaid, and disability payments. Some of these increases were results of the recession, while others were due to Obama policies that expanded eligibility and cancelled work requirements. Since 2008, spending has soared 37.2 percent in these programs. Since 2007, spending has mushroomed nearly 55 percent 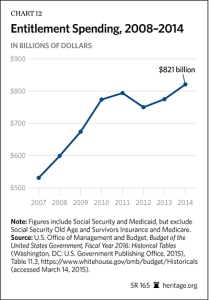