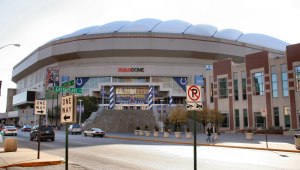 In 1984 the RCA Dome opened for business its primary tenant was the Indianapolis Colts. The total cost to complete the RCA Dome was $77.5 Million($176.5 Million in present day inflation adjusted pricing). The cost was financed by the taxpayers of Indianapolis($47.2 million worth of bonds) and The Lilly Endowment/The Krannert Charitable Trust($30 Million). In 2006 the city undertook building a new stadium where the Colts presently play today. In 2006 the total outstanding debt on principal still stood at $75 Million and scheduled to be paid off by 2021. Before 2006, the actual debt was supposed to be paid off by 2013, but through refinancing of bonds, it jumped to 2021.

The city of Indianapolis does its best to make access in researching debt it owes on things tedious to find. The most current numbers I could find were published in 2010 showing RCA Dome debt standing at $61 Million. With eleven years of payments left comes to about $5.5 Million in annual payments on an already demolished structure.

Investors make a lot of money off local governments through time in financing these short term adventures that politicians want. Lucas Oil Stadium where the Colts presently play was built for $700 Million along with their new $275 Million Convention Center. This was financed over thirty years and once interest/financing charges are factored in, the combined project will cost taxpayers about $1.8 billion.