Whether you believe in total economic collapse, government anarchy or the climate will implode there are options out there in how to make it through tough times. Many will have to become “Daryl” in order to survive, but those with money will have another option.

When Tyler Allen agreed to fork over $3 million in cash for a luxury condominium near Concordia, Kan., he wasn’t attracted by the indoor swimming pool, 17-seat movie theater, or hydroponic vegetable garden.
The real selling point of the 1,820-square-foot apartment: It will be buried 174 feet underground in a decommissioned missile silo sturdy enough to withstand a nuclear attack.

Mr. Allen, a 45-year-old Orlando, Fla., sports bar and nightclub owner, insists he isn’t a “tinfoil hat-wearing” type preparing for the end of the world. Rather, he cites growing security threats—such as a global health pandemic, cataclysmic weather and terror attacks. “There’s a Camp David for the president,” he says. “If you’re at a certain level where you can afford it, you can get that, too.”

The so-called Survival Condo complex boasts full and half-floor units that cost $1.5 million to $3 million each. The building can accommodate up to 75 people, and buyers include doctors, scientists and entrepreneurs, says developer Larry Hall.

Safeguarding your home is not just a niche anymore, revenue in the this type of business field is rising.

Spending on residential security rose from $7 billion in 2001 to $12 billion in 2011, and is projected to climb above $16 billion in 2016, according to Freedonia Group, a market-research firm based in Cleveland. That covers everything from routine security devices to the kind of reinforced chambers that gained widespread attention more than a decade ago and were featured in the 2002 film “Panic Room.”

Here are some photos: 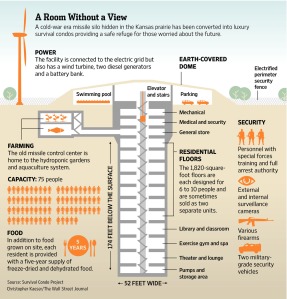 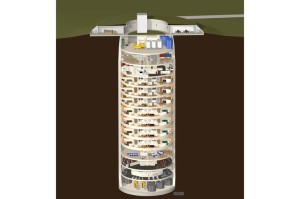