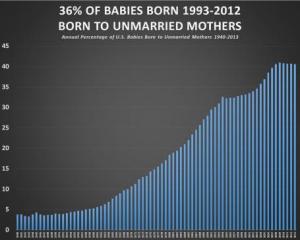 The reason babies born to unwed mothers is critical to watch with a nations economics is because historically this group gets government benefits in the form of welfare, WIC, housing, etc. Even the government has stated this in a recent report:

In its latest annual report to Congress on “Welfare Indicators and Risk Factors,” the Department of Health and Human Services pointed to the high rate of births to unmarried mothers, saying “data on nonmarital births are important since historically a high proportion of welfare recipients first became parents outside of marriage.”
“Historically a high percentage of AFDC/TANF recipients first became parents outside of marriage,” said this HHS report.

To back up the governments statement on this is earlier in the month it was reported that the US Government welfares roles had grown to 109 million citizens.

Hat Tip to CNSNews for the data.