While Donald Trump is the GOP Presidential candidate, others who ran for President during the primary if nominated, would’ve faced the same thing: biased media.

It’s not even a debate anymore of how biased news media is backing the Democratic Party. Decade ago many Democrats would nash their teeth and vehemently deny it. Today, just a little smirk and shoulder shrug and they go about their way. As a conservative, I’ve accepted this premise and just patiently await the media’s collapse. Is it frustrating? Yep. Not much I can do but publish my own blog posts and recommend those who do great work.

Media Research Center had this research:

The Media Research Center analysis of 1,099 presidential election stories from January 1 to June 7 found that Trump did indeed dominate coverage, getting nearly half of the total airtime.

The report from MRC Research Director Rich Noyes found that much of that time was focused on Trump “scandals” and controversies. 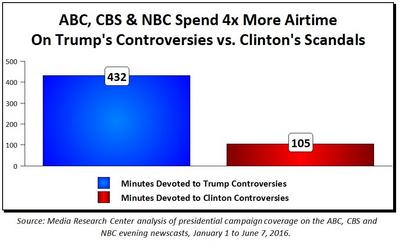 For example, the lingering questions about Clinton’s handling of the 2012 Benghazi attack drew only 77 seconds of evening news airtime from January 1 through June 7.

Bigger aspect is how news is reported. While that may sound trivial, it certainly sets a tone and can skew the message. For example, Donald Trump has been accused of being sexist and a womanizer. Yet Hillary Clinton is married to a man who was accused of rape and paid a lofty settlement because of it. How does the media report it?

And on the adultery issue, said Noyes, “Most of the network coverage was framed not around the controversy of Clinton’s actual conduct, but the notion that Trump was going too far by raising the issue of the former president’s infidelity. On the May 19 Evening News, for example, CBS’s Nancy Cordes labeled it ‘harsh’ of Trump to bring up the case of Juanita Broaddrick, who in 1999 accused Clinton of raping her in 1978.

You can read the whole article here at the Washington Examiner. It also includes another chart breaking down media coverage minutes.